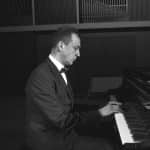 Italian pianist Pasquale Ivan Dante Rinaldi will present a series of his most brilliant compositions alongside world known danish bassist Jesper Bodilsen and sardinian drummer Bruno Tagliasacchi Masia.
Born in Milano, Pasquale Ivan Dante Rinaldi after studying and performing in Helsinki and Stockholm he decided to move in Aarhus, Denmark. As a band leader he led his own trio since 2010 and among other bands he played and recorded the album titled “Fonoscope” (2017) with the trio Deezmal. Later on he joined the trio Maisemat recording the homonymous album “Maisemat” (2019).
“Fonoscope” is an electronic-jazz record, embellished with pop nuances, where the band explores the sounds that the new technologies can help to create as moog, synthesisers and plug ins.
“Maisemat”, the first record of the trio can identifies in the new nordic-jazz style. In this work the band explores the different compositional possibilities and interplay, trying to recreate the different landscapes of nature and humankind mind (Maisemat in Finnish) by the means of music performance and improvisation.
Pasquale is a modern and creative composer, highly inspired by the nordic approach to jazz and among his influences are Bobo Stenson, Esbjorn Svensson, and some of the greatest American artists such as Keith Jarrett, Brad Mehldau, Aaron Parsks.

The event is finished.